St Columba's Bay on Iona can only be reached on foot and is around 2.5 miles each way, but is very much worth the effort.  Allow for 1.5 hours to reach the bay from the ferry pier.  It is a beautiful walk, especially when crossing the golf course, when the view of the “Bay at the Back of the Ocean” opens out. Keeping the coastline on the right, follow a rough track, which passes the pretty inland lochan of Loch Staoineag. Before long the ocean on the south coast of Iona can be seen and then St Columba’s Bay, reputed to be where the saint landed on Iona.  The bay is very rocky with a large outcrop dividing the bay and large mounds of rounded pebbles piled with mounds of beautiful round pebbles piled high.  The pebbles are smooth and rounded, enhancing the variety of colours and patterns, including white and green Iona marble. A low hill, called the Hill of the Back to Ireland is named because it is said that St.Columba climbed this hill to make sure that he could no longer see Ireland, and was free to establish a community on Iona. The hill is marked by a cairn on top. 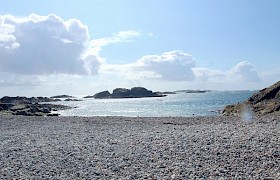 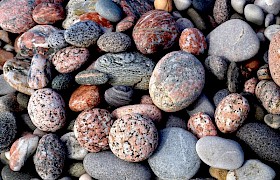